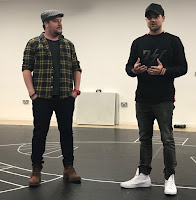 Welcome to a very special blog, in a few weeks time Eugenius The Musical opens in London at The Other Palace in London. If you haven't already booked tickets now is the time. The show promises to be incredible and if the rest of the soundtrack is anything like the first few songs that have been released we are in for a treat. " Go Eugenius " has been on my play list for weeks and I can't wait to hear the rest of the album when it arrives very soon. I was lucky to put some questions to Ben Adams who along with Chris Wilkins are the co-creators of the show.

How did you come up with the concept for Eugenius

Chris Wilkins and I have been friends for many years and had always talked about writing a musical together, one that brought every element of what we love together into one big melting pot. we both grew up in the 80's and love all the music and pop culture from that era, plus Chris is a massive geek and loves comic books so thats where we started. the problem was we had no idea where to start having never written a musical before-yes i write and produce for other artists, myself a1 etc and Chris had had a hand in writing scripts before but creating our own musical was a different ball game. thankfully, 10 pints at the pub and a very drunken writing session around my piano at home til the early hours of the morning, gave us our opening number 'Tough Man' and then we had lift off! 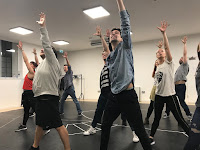 Go Eugenius is pretty special. 'Don't shoot for the stars' is also pretty epic. No Pants Dance is hilarious. Comic Book Kind Of Love is how all power ballads should sound. The Future Is Bright is also one of my faves.........infact this is a very hard question because if i didn't absolutely LOVE each and every song in its entirety then it didn't make the show. I've probably written about 50 songs for the show-having written songs day in day out for years i like to think I'm a pretty good judge of when I've written something amazing or not, and with Chris and an amazing team behind eugenius we worked out exactly what type of song we needed and where-some painful song cuts have been made throughout the process (as in brilliant tracks we decided not to use) but every song in a musical has to drive the plot forward and justify its own existence so anything that stalled the narrative had to go.........at least I have a lot of material lying around that i can use on the next show we write!

How does it feel seeing the show have its own Westend run? 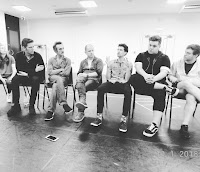 We are absolutely living the dream right now. to see very clever, serious and well respected actors perform your work is an indescribable feeling. to how they interpret the material is just mind blowing-like christmas every day in the rehearsal room for us. and to think that very soon it will be unleashed to the world is very exciting. its been many years of hard graft but it has all been worth it. its also hilarious to think that even the most ridiculous of ideas, jokes and characters we dreamt up while ploughing through ideas in my studio, are coming to life- hearing THE FISH PEOPLE sing lines like 'Pervert In The bushes' is just hilarious...........

From the start of the Go Eugenius planning till now what have been your highlights so far?


There are far too many to mention! seeing the finished  score and script written out and printed and sitting in front of you  is pretty epic. seeing the comic book artists create cartoon versions of what you have in your head. bringing the best creatives imaginable in to help bring the story to life......from choreography, to lighting, to set and costume design, to musicians and actors performing the tracks............its just amazing. and to be there and be so involved in each and every part of the process is a blessing. many writers will do their bit and leave the rest up to others but we really couldn't let that happen-its our baby and its gotta be right! plus, its far too exciting to not get involved on every aspect!

How was it seeing the posters go up for the show knowing its launch is not far away ?


scary. but we cannot wait. we hope it brings as much joy to those watching it, as it has brought to the cast, the band, the creatives and all involved in making it! GO EUGENIUS!


A massive thank you to Ben for being involved in this interview and blog. Don't forget to let me know if you are off to see the show during the run. There are a couple more blogs on the way to do with the show so don't forget to pop back soon and check them out