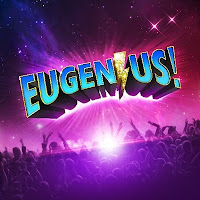 Hey Everyone,
Welcome to a special set of Eugenius themed blogs heading your way this week
To start off we have a brand new interview with Ben Adams ahead of the shows return in a few days time

How does it feel on the run up to the start of Eugenius returning to the Westend ?
Well, it’s a mixture of feelings. I’m super excited to show everyone what we’ve been working on since the last run. New script, new song, new choreography. And a totally amazing cast! It’s even better! But it’s also a fairly stressful time for everyone making sure it’s right and we have a very limited amount of tech days to do that before it’s open so we’ve got a lot of work to do. I’m also trying to juggle the a1 reunion, and flashdance so I’m all over the place at the moment-literally Havnt had a second to myself in months!

Seeing how popular the show was earlier in the year what’s been the biggest personal highlight for you?
Just seeing the joy on people’s faces when they left. It’s the first time I’ve created something that I can experience with the audience and sit amongst them rather than being on stage. It’s an amazing feeling.

What’s the biggest thing you are looking forward to for the shows return?
The new song! Hands Up! is released on 31st August and I think it might be my favourite of the whole show!

What’s next after this for Eugenius ?
We have some big plans for it next year but we need to keep that under our hats for the moment-don’t like to get excited about things until I see signatures on the dotted line......

What’s been the most surreal thing that’s happened so far on the Eugenius journey
Seeing people get tattoos of the lyrics. It’s amazing that Eugenius has meant so much to people that they want to have it with them for the rest of their lives-it’s incredible.

A massive thank you to Ben for taking part in the interview for us.
Don't forget to keep an eye later today for some exclusive footage from the press evening coming live on our instagram channel over on Box Office Bloggers Instagram