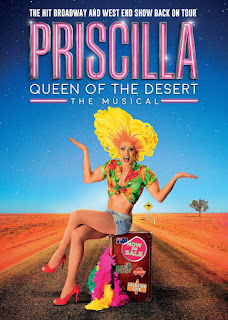 Mark Goucher and first-time producer Jason Donovan have today announced that their brand-new production of the much-loved glittering hit musical Priscilla, Queen of the Desert the Musical will extend its UK tour dates through to 2020. The show, which was announced last year, and will star Strictly Come Dancing winner Joe McFadden, will tour the UK and Ireland from September 2019. It marks Donovan’s first time as a producer, having performed in the cast of the original West End production and two subsequent UK tours. The producing team is completed by Gavin Kalin and Matthew Gale.
Full casting for the production has also been announced today. Previously announced Joe McFadden will play Tick/Mitzi, Laurence Olivier Award Winner Miles Western will take on the role as Bernadette and Nick Hayes will play Adam/Felicia. They are joined by Daniel Fletcher (Bob), Miranda Wilford (Marion), Kevin Yates (Miss Understanding), Jacqui Sanchez (Cynthia). The Divas will be played by Nikki Bentley, Claudia Kariuki, Rosie Glossop and the cast is completed by Jak Allen-Anderson, Natalie Chua, Emma Crossley, Jordan Cunningham, Martin Harding, Justin-Lee Jones, Nell Martin and Edwin Ray.
The iconic hit musical has more glitter than ever before, featuring a dazzling array of stunning costumes, fabulous feathers and a non-stop parade of dance-floor classics including It’s Raining Men, I Will Survive, I Love The Nightlife, Finally and many more.

Based on the Oscar-winning film, PRISCILLA is the hilarious adventure of three friends who hop aboard a battered old bus bound for Alice Springs to put on the show of a lifetime. Their epic journey is a heart-warming story of self-discovery, sassiness and acceptance.