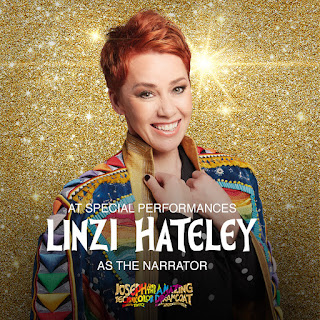 Casting reunites Linzi with JASON DONOVAN, who returns in the role of Pharaoh along with JAC YARROW who will wear the Dreamcoat again

Michael Harrison and the Really Useful Group are delighted to announce today that Linzi Hateley – who starred in the original London Palladium production of Joseph and the Amazing Technicolor Dreamcoat - will make a sensational return to the musical in this summer’s strictly limited season at the iconic theatre.

Linzi – who was nominated for an Olivier Award for her performance as the Narrator, and starred alongside Jason Donovan in the title role - will perform as in the role at special performances, in the new production of Andrew Lloyd Webber and Tim Rice’s legendary musical.

Alexandra Burke will play The Narrator for the other performances this summer in the celebrated musical. Her many West End credits include the lead roles in The Bodyguard, Sister Act, Chess and Chicago. Alexandra first rose to fame winning The X-Factor in 2008, and has since gone on to sell over 5 million records.

The production will begin live performances on Thursday 1 July, with Linzi Hateley’s first performance on Saturday 17th July after the proposed "Step Four" in the Government's roadmap to easing restrictions, and therefore is planning to accommodate full-capacity audiences in accordance with the intended lifting of all limits on social contact.

Michael Harrison said: “This dream just keeps getting better. It was special enough to announce Alexandra Burke recently as the Narrator, but to now have the added bonus of Linzi playing the role at special performances - and to reunite her with Jason Donovan again at the London Palladium -  turns Joseph into a dream ticket. The combination of nostalgia for the original Palladium production, coupled with the excitement of our new critically acclaimed version, means we all have a summer to look forward to.”