Theatre on a budget part 1 - The Lion King Westend 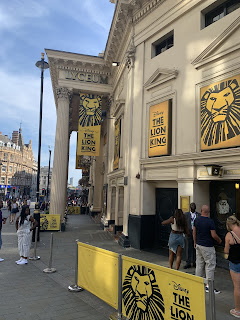 Firstly Happy New Year and a big welcome back to the blog.

Going to the theatre doesn’t have to cost a fortune. In recent years ticket prices have risen and I think with a lot of new shows opening in the Westend it puts people off booking.
In the start of a new series that will run on the blog over 2020 we will be showing how you can still book for the Westend shows at a reasonable price.

Starting off the series is one of the Westend’s longest running favourites ‘The Lion King’ click on the link for more information on the show from the official website.

Having recently just celebrated its 20th birthday In the Westend it’s a show I would recommend for all to see.

Based on the iconic Disney movie the show has drawn crowds from all around the world and regularly plays to sell out audiences.

To get the chance to see the show at a reasonable price it was time to do a bit of investigating.
Now there are many ticket websites all offering different ticket deals but my personal advice is to take some time with booking tickets as you are more likely to save a lot of money and still have a great view.

My boyfriend and I had both wanted to see the show for a while and after looking at lots of tickets I found some that were £22. Now they did come as restricted view and I thought as I had some time the next day I would go to the theatre box office to see what advice I could get for booking.

On arrival the staff were incredibly helpful and had some great knowledge of the seat map.
When I explained our budget and where we had originally looked to book for the staff guided me to better seats for the same price.
They were slightly restricted but it was explained that these would be much better then what I had originally found.
After the show we both agreed that yes there had been a slight restriction but we didn’t feel as though we had missed much from the production.

The show itself holds all the magic that comes from Disney. From the incredible talent of the cast to the award winning soundtrack the show holds your imagination from the start to the end.

It easily gains a 5 star review and you will easily be able to see why year after year the crowds keep returning.

Have you seen The Lion King? Let me know below what you thought of the show and what your favourite parts are.

Do you have experience in going to the theatre on a budget, please let me know in the comments below.

I hope you have a great week