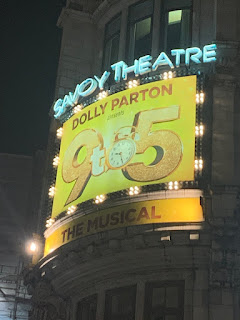 9 to 5 The Musical
Savoy Theatre

Welcome back to the blog and my review on 9 to 5 The Musical which we went to see during the London Theatre Week.

9 to 5 The Musical has been playing in the Westend since February 2019 and has gained a big following from audiences since.

With the music and involvement of Dolly Parton throughout the show you are taken back to the 80's and into the story of Violet, Judy and Doralee.

As the story develops you see the women take a stand against the sexist remarks and advances from their boss and push to make the balance of man and woman equal in the work place.
The humour in the show was very funny and had the audience engaged the whole way through.

The cast were great with Louise Redknapp as Violet, Chelsea Halfpenny as Judy, Natalie McQueen as Doralee, Bonnie Langford as Roz along with the comic wit of Brian Conley as Franklin you could instantly see the energy and why the show has such a following.

It was great to see how involved Dolly Parton is with the show and if you are a fan of her music then you will love the show.

Using the Today Tix app and the London Theatre Week deals we managed to grab some great seats towards the front of the Grand Circle of the Savoy Theatre.The theatre itself is great and even high up we had a great view and didn't miss out on anything that was on stage.

Click here to grab some 9 to 5 the musical tickets now. The show is running till May 23rd in the Westend.

Let me know if you've seen the show and what you thought below.

Have a great week