“TELL ME ON A SUNDAY” STARRING JODIE PRENGER 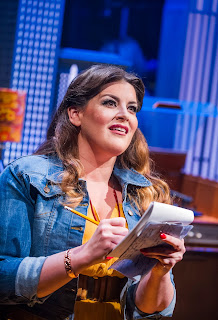 “Tell Me On A Sunday”

Producer Jamie Wilson said today “We are thrilled that we are able to revive the acclaimed Watermill Theatre production of Andrew Lloyd Webber and Don Black’s Tell Me On A Sunday to be able to play a part in the reopening of theatres around the UK. Tell Me On A Sunday, with its cast of just one actress, is probably the most naturally socially distanced musical in the world! We are delighted that Jodie Prenger is able to return to this role to reprise her incredible performance as “Emma”. This production is the perfect way for audiences to support their local theatre with this classic show.”

TELL ME ON A SUNDAY charts the romantic misadventures of a young English girl in New York in the heady days of the 1980’s. Brimming with optimism, she seeks success and love. But as she weaves her way through the maze of the city and her own anxieties, frustrations and heartaches she begins to wonder whether she's been looking for love in all the wrong places.

This iconic musical features Andrew Lloyd Webber’s wonderful score, accompanied live by West End musicians, including the chart-topping Take That Look Off Your Face, and title track Tell Me On A Sunday.

Jodie Prenger most recently starred in the National Theatre’s West End production of A Taste of Honey. Recent theatre work includes the national tours of Abigail’s Party, Shirley Valentine, Annie, Fat Friends The Musical, Tell Me On A Sunday and Calamity Jane. In the West End she has starred in Oliver! at the Theatre Royal Drury Lane, One Man Two Guvnors at the Theatre Royal Haymarket and Spamalot at the Playhouse. She also appeared in Les Misérables which was the inaugural production at the Dubai Opera House. Jodie has also starred in pantomimes at the Liverpool Empire and Birmingham Hippodrome. Her television acting work includes Years and Years, Jamie Johnson, Citizen Khan, Casualty, Wizards vs Aliens, Candy Cabs and Waterloo Road. Television presenting work includes Let’s Dance For Comic Relief, Top Dog, Over The Rainbow and Let It Shine. Writing credits include Cinderella: The Socially Distanced Ball for Turbine Theatre and The Choir Musical.

Originally conceived for television, TELL ME ON A SUNDAY has been performed by many legendary musical theatre stars including Marti Webb, Bernadette Peters and Sarah Brightman. This new production for 2021 will include an intimate chat with Jodie and Musical Director Francis Goodhand about life, love and playing the role of Emma.

ANDREW LLOYD WEBBER is the composer of some of the world’s best known musicals including Cats, Evita, Joseph and the Amazing Technicolor Dreamcoat, Jesus Christ Superstar, The Phantom of the Opera, Sunset Boulevard, School of Rock and the forthcoming Cinderella. He is the recipient of many awards including 7 Tonys, 7 Oliviers, a Golden Globe, an Oscar, 2 International Emmys and the Richard Rodgers Award for Excellence in Musical Theatre.

DON BLACK is an Oscar winning lyrist for Born Free and has penned numerous James Bond theme tunes, and chart hits including Michael Jackson’s Ben and Lulu’s ‘To Sir With Love.’

TELL ME ON A SUNDAY is directed by Paul Foster, has musical direction by Francis Goodhand and musical supervision by Catherine Jayes. It is designed by David Woodhead with lighting design by Howard Hudson and sound design by Tom Marshall.

FURTHER VENUES TO BE ANNOUNCED