Keala Settle - Live at Christmas at the Cadogan Hall 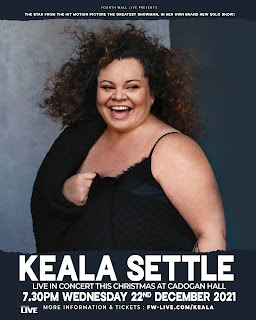 Keala Settle - Live at Christmas at the Cadogan Hall

Fourth Wall Live is thrilled to announce that Keala Settle will be performing live in concert this Christmas at the Cadogan Hall at 7.30pm on Wednesday 22 December 2021. Tickets will be on sale from 12.00noon on Friday 28 May 2021. www.fw-live.com/keala

Keala said today, “After the past year and a half we have had, I have learned and understood more about my voice and the healing power of music. This concert is filled with music that has helped heal me and rediscover life. I cannot wait to share it with you all. Performing in London will be a long-awaited homecoming and I am so excited to celebrate with everyone!”

Actress and singer, Keala Settle, is the breakout star of 20th Century Fox’s, “The Greatest Showman”, alongside Hugh Jackman, Michelle Williams, Zac Efron, and Zendaya. The Hawaii native’s performance of the film’s Oscar-nominated song “This Is Me” became an explosive anthem of self-acceptance, propelling the soundtrack to the top of the charts worldwide and reaching #1 on the UK’s charts for a record-smashing 28 weeks.

“The Greatest Showman: Original Motion Picture Soundtrack” became a global success and 2018’s best-selling album in the world with 3.5 million units sold. The album reached Number One on iTunes in over 77 countries, Number One on the charts in 9 countries and Top 10 in 12 countries. Furthermore, the soundtrack holds a spot in the Top 10 albums that have spent the longest time at #1 in history.

In 2019, Keala joined Hugh Jackman on his world tour, The Man. The Music. The Show., where she performed “This Is Me” for audiences across Europe, New Zealand, Australia, and parts of North America.

Keala is no stranger to the stage; she earned a Tony-nomination for her stirring Broadway performances, which include “Hands on a Hardbody”, the revival of “Les Misérables”, and “Waitress”. This paved the way for her foray into film, where she debuted in 2015’s Ricki and THE FLASH alongside Meryl Streep. Keala also stared in Melissa McCarthy’s directorial collaboration with a short for Wal-Mart entitled “The Box”, which first aired during the 2018 Academy Awards. The poignantly emotional short featured Keala’s soaring cover of Sia’s “Birds Set Free”, adding her unique confidence and power to an already inspiring song. That same year, she was given the opportunity to work with singer-songwriter-recording artist Todrick Hall and Jade Novah on the title track of his most important album to date; “Forbidden.” In December 2020 she was featured in the film “All My Life” alongside Harry Shum, Jr. and Jessica Rothe. The film’s soundtrack includes two songs she covered: “Love Song” and “Hit Me With Your Best Shot.”

In December 2017, Keala released her debut EP Chapter One, a compilation of contemporary R&B infused covers, including her interpretation of Bette Midler’s “The Rose.” In April 2019, Keala released her single “Feels So Good,” featured in Target’s “Do More” campaign. Keala has also recently released three other singles: “Harder,” “The Last Letter” and “Shooting At Myself.” Keala Settle effortlessly bridges the space between the Motown soul queen and modern pop star, thanks to her iconic voice and her unwavering confidence.

Fourth Wall Live is an exciting new collaboration between boutique concert producer Club 11 London and theatrical producers DLAP Entertainment. Having previously successfully produced Chita Rivera at Cadogan Hall together, the teams have now combined to bring audiences a plethora of international artists in concert at leading venues. Their most recent production, EUROBEAT – THE PRIDE OF EUROPE was loved by audiences and critics alike during its streamed season in May 2021.