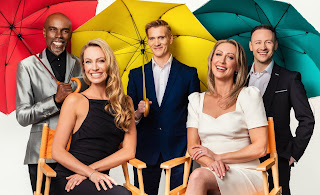 The production will play a strictly limited run at Sadler’s Wells from Friday 30 July – Sunday 5 September 2021 (Press Night: Thursday 5 August), ahead of a 2022 UK tour (tour casting to be announced).

Steps and stage star Faye Tozer (Everybody’s Talking About Jamie, West End; Me and My Girl and Tell me on a Sunday, UK tours) plays leading lady Lina Lamont.

They will join the acclaimed star Adam Cooper, who returns to the show with his legendary performance as Don Lockwood, having earned critical acclaim in the role at Chichester Festival Theatre and again when the show transferred to London’s Palace Theatre. Adam is one of the most celebrated stars to perform at Sadler’s Wells, where he has headlined Matthew Bourne’s iconic production of Swan Lake, as well as many other productions.

Singin’ in the Rain will also reunite the original director Jonathan Church with choreographer Andrew Wright.

Don Lockwood is a silent movie star with everything he could want – fame, adulation and a well-publicised ‘romance’ with his co-star Lina Lamont. But Hollywood is about to change forever. There is rumour in the studio of a new kind of film, where the actors actually talk … and sing … and dance. Can Don and the uniquely voiced Lina make the transition, and will chorus girl Kathy Seldon fulfil her dream of stardom and capture Don’s heart along the way?

This production of Singin’ in the Rain opened at Chichester Festival Theatre and extended due to unprecedented public demand, before a transfer to London which received huge critical acclaim and four Olivier Award nominations.

It played to more than 750,000 people…. some leaving the theatre a little wetter than when they arrived! In fact the iconic rain scenes:

Use 6k litres of water, equivalent to 5 tonnes (here's a list of things which also weigh 5 tonnes: 2 Rhinos, 11 Grand Pianos or 30 Panda Bears!)

Takes 15 minutes to drain. Afterwards it is recovered, it is then re-cycled, cleaned and used again

Heats the water to 37 degrees for performer comfort!

Singin’ in the Rain features songs by Nacio Herb Brown and Arthur Freed, including Make ‘em Laugh, Good Morning, Moses Supposes and Singin’ in the Rain. Original screenplay and adaptations are by Betty Comden and Adolph Green. Reuniting the original Chichester production team, Singin’ in the Rain will be directed by Jonathan Church, with Olivier Award-nominated choreography by Andrew Wright. The production is designed by Simon Higlett, with lighting by Tim Mitchell. Stuart Burt is Casting Director.

The stage production of Singin’ in the Rain is based on the classic Metro-Goldwyn-Mayer film, regularly voted the most popular film musical of all time.

After Sadler’s Wells, Singin’ in the Rain will return to Japan. This will be the third season the production has played in the country. The production will then embark on a UK tour in 2022.