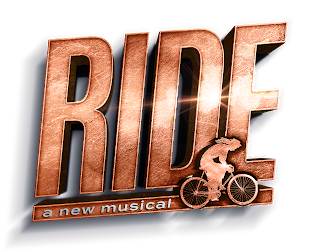 Winner of a VAULT Festival Show of the Week Award

and title song nominated for the

‘RIDE’ transfers to the West End for two special semi-staged

One woman. One bicycle. One hell of a story.

It’s 1895 and Annie Londonderry has returned victorious to America, hailed as the first woman to ever cycle around the world. She’s pioneering, she’s plucky, and she’s pitching her story to the New York World. But she can’t do it alone. Joined at the eleventh hour by unwitting secretary Martha Smith, the two begin to share Annie’s unbelievable adventures. But before long, the cracks begin to show, and Annie is forced to confront a past she’d rather leave unexplored.

The incredible true story of a young woman with big plans, and an even bigger imagination bursts into life in this new musical by JACK WILLIAMS (Music & Lyrics) and FREYA CATRIN SMITH (Music, Book & Lyrics), who also co-directs with ADAM

It stars GEMMA SUTTON (‘Kate Draper’ in ‘Girl From the North Country’ in the West End, ‘Young Sally’ in ‘Follies’ at the National Theatre, ‘Charity’ in ‘Sweet Charity’ at The Watermill) and BRONTÉ BARBÉ (‘Ado Annie’ in ‘Oklahoma’, Chichester Festival Theatre, and ‘Carole King’ in ‘Beautiful’, UK tour).

Bronté’s work in theatre includes ‘Ado Annie’ in OKLAHOMA at Chichester, starring as ‘Carole King’ in the first UK tour of the musical BEAUTIFUL, ’Jane’ in the concert version of GIRLFRIENDS at the Bishopsgate Institute, ‘Nadine’ in Drew McOnie’s production of THE WILD PARTY at The Other Palace, ‘Light Bulb Seller’ in STRIKING 12 at the Union Theatre, ‘Helen/Vinnie’ in THE DONKEY SHOW (Proud London) and ‘Princess Fiona’ in the UK tour of SHREK, and ‘Little Red Riding Hood’ before this. She started performing at a very young age in her hometown of Macclesfield. In 2010 she was selected as one of the final 10 in Andrew Lloyd Webber’s search for Dorothy - ‘Over the Rainbow’. Following this, Bronté attended Mountview Academy of Theatre Arts where she gained the Gyearbuor Asante prize for Acting and graduated with first class honours. After finishing Mountview she made her professional debut as ‘Odette’ in CARNIVAL OF THE ANIMALS (Riverside Studios). Other credits include: CALL THE MIDWIFE, YEARS AND YEARS (BBC), ‘Sharon’ in COOL RIDER - THE GREASE 2 CONCERT (Lyric Theatre, West End) and cast recording, MOMENTOUS MUSICALS UK Tour, ‘Penny Pingleton’ in HAIRSPRAY (Kuala Lumpur/Singapore) and the role of ‘Megan’ in the BUT I’M A CHEERLEADER workshop directed by Jerry Mitchell.

Jack Williams is an award-winning composer and lyricist. His musicals, co-written with Freya Smith, include RIDE (winner of VAULT Festival’s Show of the Week Award); THE LIMIT (winner of VAULT Festival’s People’s Choice Award and Origins Award for Outstanding New Work) and PART A (Edinburgh Fringe Festival sell-out show). He has been a finalist for both the Stiles & Drewe Best New Song Prize and MTI Mentorship Award.

awarded an MGCFutures Bursary, and in 2020 she was a finalist for the Cameron Mackintosh Composer Residency and the Stiles & Drewe Best New Song Prize.

While training at Tring Park School for the Performing Arts on a full scholarship, Alfred was commissioned to create CHAOS AT THE KEATON CAFÉ (Bloomsbury Theatre) and JABBERWOCKY (New Wimbledon Theatre) for the National Youth Ballet, where he was mentored by Olivier Award winning director-choreographer Drew McOnie. Since graduating, Alfred has received

Macy Schmidt is an Egyptian-American Orchestrator & Music Director based in NYC. She is currently working on Disney’s re-imagined UK tour of BEAUTY AND THE BEAST alongside the show’s original creative team. Recent projects include: TINA (Broadway); the upcoming Disney revival of AIDA; the musical adaptation of Chelsea Clinton’s SHE PERSISTED (Music Supervisor) and the acclaimed RATATOUILLE: THE TIK TOK MUSICAL (Orchestrator), for which her work was praised by The New York Times for its likeness to a “classic Disney Act I finale in the brassy manner of Alan Menken.” At just 23 years old, Macy recently founded The Broadway Sinfonietta, an all-female-identifying, majority women-of-color orchestra showcasing BIPOC women musicians on Broadway, which quickly caught the attention of national press.