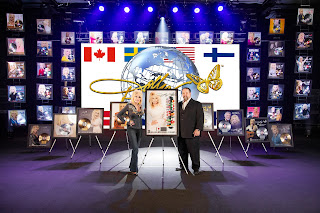 As the UK Tour recommences Dolly Parton’s 9 to 5 The Musical is thrilled to celebrate global superstar and the show’s composer, Dolly Parton, being awarded 47 new global gold and platinum certifications for her extensive music catalogue.

Proving that seven decades into her unprecedented career new ground continues to be charted, Dolly Parton is presented with a staggering 47 new sales certifications from around the world to kick off the New Year. Already awarded a plaque from the RIAA in 2014 for over 100 million units sold worldwide, these new honors show continued engagement in Parton’s extensive catalogue.

“I’ve often said that my songs are like my children, and I expect them to support me later in my life. Well, it looks like they are doing just that!” proclaims Parton. “I am so humbled to have been surprised with this incredible collection of certifications from around the world. I owe a big thank you to my fans.”

"I'm so proud to represent the hottest entertainer in the business,” says Danny Nozell, Parton’s longtime manager. “These international awards solidify the fact that Dolly is a global superstar icon that still keeps growing every year. Just when you thought her assets couldn't get any bigger, she proves us wrong again!"

The UK Tour of 9 to 5 The Musical recommenced in Southend this week starring Claire Sweeney as ‘Violet Newstead’ alongside Stephanie Chandos as ‘Doralee Rhodes’, Vivian Panka as ‘Judy Bernly’, Sean Needham as ‘Franklin Hart Jr’ and Julia J Nagle as ‘Roz Keith’.