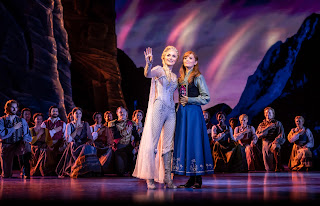 FROZEN EXTENDS DUE TO PUBLIC DEMAND

PUBLIC BOOKING OPENS ON 21 JANUARY AT 10AM

“Frozen is one hot hit”

Disney Theatrical Productions today announces that their critically acclaimed production of Frozen is extending until October 2022 due to public demand. The production opened at Theatre Royal Drury Lane in August last year, and has been playing to capacity houses since, recently receiving 13 nominations across acting and creative categories in the 2022 WhatsOnStage Awards - including nominations for Best New Musical, for both Samantha Barks and Stephanie McKeon in the Best Performer in a Female Identifying Role in a Musical category, with Oliver Ormson and Obioma Ugoala both nominated for Best Supporting Performer in a Male Identifying Role in a Musical. In addition, the production also received nominations for Best Direction for Michael Grandage, and nominations for Best Set Design, Best Costume Design, Best Choreography, Best Musical Direction, Best Lighting, Best Video Design and Best Graphic Design.

“A visual feast to warm even the coldest of hearts.”

“Frozen is an awesome spectacle with more heart, depth and darkness than the film.”

*Valid on Wednesday and Thursday 7pm performances and Thursday 2pm matinees subject to availability. Excludes school holidays and other blackout dates that may apply.

Plus one free teacher ticket for every ten paid tickets

Valid on Wednesday & Thursday 7pm and Thursday 2pm performances subject to availability. Excludes school holidays and other blackout dates that may apply. Minimum group size is 10. Education rate valid for groups up to Year 11.