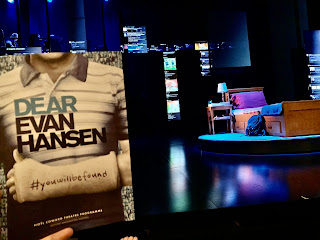 The show tells the story of Evan and how his life is controlled with anxiety, fear and loneliness. It shows the story that we all make mistakes in life that you can't fix.

The cast portray from both the children and parents sides that as children are growing up they are using screens more and more and how people use these screens to hide behind in posting what ever they want to post.

We'd waited to see this show for a very long time and managed to book second row using Today Tix and this years London Theatre Week deals. What really struck me was the power that the cast had on you as the show went on. When you think of a Westend Musical you think of a huge cast but this was is small but had the same effect.

On the day we went we were lucky to see Marcus Harman as Evan. From the start of the show he took you straight into the story of Evan and on the journey of how he wanted to do right but couldn't change what he had done.

The soundtrack itself is great, we'd heard many songs over lock down but now having seen the show they have a whole new meaning.

You will be Found is a stand out from the show - not only for how well it's written but also how the cast and staging is used in the show.

The staging is very simple there isn't big staging used but how each scene is put together it is it really works in the show.

The show is playing at the Noel Coward theatre in the Westend just a short walk from Leicester Square station. The staff we spoke to were all lovely and the theatre itself was easy to find your way around.

Let me know in the comments if you have seen the show and what you thought.