The Book Of Mormon - Prince of Wales Theatre 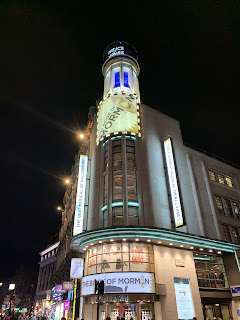 The Book of Mormon - Prince of Wales Theatre

The show tells the story of Elder Price and Elder Cunningham and their journey and adventures whilst they take part in their mission in Uganda.

The show is incredibly funny the whole way through. From the moment Elder Price and Elder Cunningham meet and leave for their journey you know it is not going to be straight forward.

What follows is journey that keeps you laughing and has done in the Westend since 2013. The show is just as popular now as it was when it first opened.

The soundtrack is a firm fan favourite which I now understand. It'll be one you'll have on your playlists for the foreseeable.

With its home firmly cemented on the corner of Leicester Square and Piccadilly Circus it's one you really need to buy a ticket for. The theatre itself is lovely and has a lot of space to move about in. We had a great view from our seats and even though it was sold as slightly restricted we didn't feel that we missed anything. We got our tickets on Today Tix with their London Theatre Week deals.