Eurobeat - The Pride of Europe 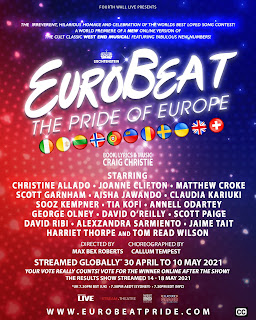 The Pride of Europe

Fourth Wall Live are delighted to announce the world premiere of a new online version of the cult West End Musical EUROBEAT – The Pride of Europe. This irreverent, hilarious homage and celebration of the world’s best loved song contest will be filmed at The Clapham Grand and streamed globally from 30 April – 10 May 2021 on Stream.Theatre. Viewers will be asked to vote online after watching the show (Your vote really counts!) and The Results Show will be streamed from 14 - 18 May 2021. www.eurobeatpride.com

Now featuring additional new songs and material EUROBEAT – The Pride of Europe has been delighting audiences since its 2008 West End run, this is the latest iteration to join the Eurobeat canon, which (much like its real-life counterpart) is continuously evolving, adapting and reflecting current times. After Moldova and Bosnia & Herzegovina, it is now Liechtenstein’s turn to crown this year’s Eurobeat champion. Take a trip to this tiny Alpine nation for some hilarious new songs, and some old favourites.

This loving send-up is bound to delight any fan of Europe’s largest television event! A live stream of power ballads galore, outrageous dance routines, key-changes, drag queens, a sprinkle of politics and the drama of crowning a winner! Eurobeat: The Pride of Europe is a celebration of an ever more diverse continent that sure loves to party. A song contest which reflects quirky, colourful and camp Europe, where even the smallest can come out and make it big!

EUROBEAT - The Pride of Europe has a book, music and lyrics by Craig Christie, is directed by Max Bex Roberts, choreographed by Callum Tempest and the musical supervisor is Adrian Kirk.

stream.theatre is a joint venture between ROYO and BROADWAY ON DEMAND to combine expertise in streaming technology, theatre producing and rights licensing to create the world’s first digital venue. stream.theatre provides theatres, producers and artists all of the tools they need to deliver streamed productions to their audiences and generate revenues. It provides the STAGE with an integrated video player, specifically conditioned for streaming arts programming, the BOX OFFICE with a secure payment system, the CUSTOMER SERVICE with a live chat facility to an experienced team, integrated CAPTIONING to make performances more accessible, GEO-FENCING and TICKET CAPACITY LIMITS to protect authors, and VIDEO CAPTURE with a 4k capture solution as well as live vision mixing, live streaming technology and all equipment necessary for a multiple camera shoot.

stream.theatre makes streaming possible for productions of any scale and has hosted, captured and partnered on over 600 events since launching in September 2020. From West End and Broadway musicals to high profile awards ceremonies, intimate concerts to Off-West-End fringe productions - streaming is now accessible for everybody.