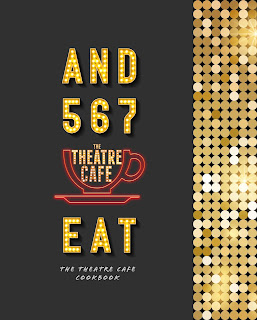 Over the past year, we have all had to spend more time than usual in our kitchens. So what have our theatrical friends been cooking up? Filled with scrumptious snacks, mouth-watering meals, delectable desserts and stunning cocktails – all with stagey names, of course – And 5, 6, 7, EAT allows theatre-lovers and fellow industry members to get up close and personal with their friends and favourite performers.

The cookbook will be in hardcover and is priced at £25 plus P&P, with a portion of proceeds going toward theatre charity Acting for Others.

Not only does the Cookbook feature recipes galore but it gives you the chance to get to know the performers, and the Cafe, a little better. Find out how The Theatre Cafe came to be, plus see what sort of treats we offer inside!

Joe Davey, Owner of The Theatre Cafe, said; “We are thrilled to finally be releasing a cookbook, and thought it appropriate to commemorate one year since theatres closed on 16 March 2020. It’s been tough for our industry, but there is light at the end of the tunnel. Until then, we will go on supporting everyone as much as we can, and continue to fly our flag for the Arts.”

Mazz Murray said; “Because London theatre has been so dark, my theatre family and some of my stage-star friends have joined the amazing Theatre Cafe to make this recipe cookbook of all our foodie favs. Shakespeare would never have believed that this year ‘food be the music of love’ - so, eat up!”

Mazz Murray is a singer and performer well-known for her roles in West End productions of Mamma Mia!, Chicago, We Will Rock You and the upcoming Sunset Boulevard at Alexandra Palace Theatre.

A portion of proceeds will go toward Acting for Others, a charity that provides emotional and financial support to all theatre workers in times of need. www.actingforothers.co.uk @actingforothers

And 5, 6, 7, EAT – The Theatre Cafe Cookbook will be released in April 2021, with an exact date yet to be confirmed. The book is in association with ConcepTonic. www.conceptonic.com/

Pre-order via this link for £25 plus P&P: https://www.thetheatrecafe.co.uk/shop/theatre-cafe-cookbook/