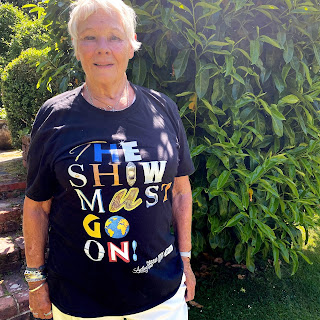 On The One Year Anniversary Of Theatres Closing Dame Judi Dench Praises Theatre Support Fund + The Creators Of ‘The Show Must Go On!’ For Raising An Outstanding £800,000 For Charities

Renowned theatre, film, and TV actress Dame Judi Dench has praised the creators of ‘The Show Must Go On!’ merchandise, the Theatre Support Fund+ for raising £800,000 for charities Acting For Others, The Fleabag Support Fund and NHS COVID-19 Urgent Appeal.

16 March 2021 marks the one-year anniversary of theatres closing across the U.K and despite the recent budget news from the government, there are still many freelancers who have not been able to claim any support with many now being out of work for a year. Theatre Support Fund+ will continue raising funds for those who have been affected by the pandemic until the theatres finally reopen and workers can return to their full-time jobs.

Dame Judi Dench said today, ‘I have been devastated by the effects the pandemic has had on the theatre industry but I am also proud of what we have achieved by standing together through these times. Chris and Damien at the Theatre Support Fund+ have done such profound work by raising this incredible amount of monies and have been able to help thousands of freelancers. There are still many workers who need our support and I am delighted to be able to support their campaign. I wish them all the best in their continued journey to help freelancers until our theatres can open again, The Show Must Go On!’

Theatre Support Fund+ are also the creators of The Show Must Go On! Live at The Palace Theatre which has been rescheduled to 2 - 6 June 2021. More information and casting to be announced soon.

Chris and Damien said today, ‘We cannot wait to bring this very special concert to the stage which will be a true celebration of the West End. We’re currently working hard with all of the shows involved to finalise plans and very soon we’ll be able to share with you all the exciting details about the show.  We look forward to welcoming you to the Palace Theatre in June and thank you for your continued support’.

In addition to Dame Judi other notable names which have supported the campaign include;

Theatre Support Fund+ was set up by theatre industry workers Chris Marcus and Damien Stanton to help those who have been affected by the pandemic. In 11 months the team have taken over 70,000 orders and the £800,000 raised has helped thousands of workers who have had no or limited work since theatres shut a year ago. ‘The Show Must Go On!’ design is an amalgamation of the 16 biggest West End Musicals and has been recognised internationally with orders been sent to 73 different countries across the globe.

Shows included on the design are & Juliet, Come From Away, Dear Evan Hansen, Everybody’s Talking about Jamie, Hamilton, Les Misérables, Mamma Mia!, Mary Poppins, Matilda The Musical, Six The Musical, Tina, The Tina Turner Musical, The Book of Mormon, The Prince of Egypt, Disney’s The Lion King, The Phantom of the Opera and Wicked.

All merchandise can be found at www.theatresupportfund.co.uk