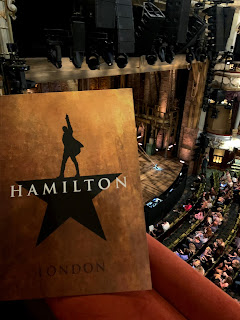 Hamilton has made its long awaited reopening in the Westend playing to sell out crowds at the Victoria Palace Theatre.

After a very long wait it was incredible to see the show on stage. It had always proved a challenge to get tickets for the show but as soon as they were released I managed to get two slips seats just after reopening.

We had seen the show on Disney Plus over lockdown but seeing it on stage really was something else.

With new ticket queueing systems in place our Covid passes were quickly checked along with our tickets before we made our way into the theatre.

This was the first time I’ve actually been in this theatre so it was nice to take a look at the posters and artwork on the walls as we made our way up to the auditorium. One thing to note is how light and airy it felt with the space around the bar area. With all the windows open it made it really nice for a bar area.

We were in the Grand Circle which even though they were the slip seats I actually found them a nice place to watch the show from. Something to note is the seats are quite steep so please do be aware of that if you do book seats there.

The show itself was incredible. The talent and energy of the cast along with a full crowd made it something else to be in the audience to see.

For just under three hours you are taken on the journey of Alexander Hamilton from his rise to George Washingtons right hand man to what happens after.

The story of history is told through a hit filled soundtrack which has firmly cemented itself as one you have to have on your playlists.

I have to give credit to the whole cast who's energy showed how good they all were and you would never guessed they'd only been back open a few days.

If you are looking for a show to add to your list to see for 2021 I really recommend Hamilton as one to see. Check out the official Website here for ticket availability Hamilton Website